The very strange case of Christine and Walter Collins 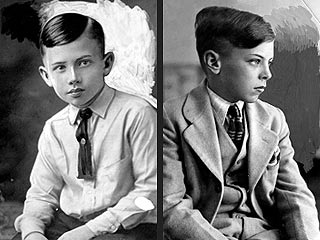 The very strange case of Christine and Walter Collins

On a very sunny afternoon on 10th March 1928, 9-year-old Walter Collins mysteriously disappeared after his mother, Christine, a telephone operator, gave him a dime to spend on admission to the theater near their Mt. Washington area home.

The nation rallied behind the grieving mother and her missing boy while the local police dragged nearby Lincoln Park lake and launched a national campaign to find Walter.

His apparent kidnapping struck a chord in a city still traumatized by a vicious crime only three months earlier. In that case, 12-year-old Marion Parker was kidnapped for ransom by a psychopath named William “the Fox” Hickman, who shoved her dismembered body from his car just before being captured.

Countless tips on Walter’s location led to dead-ends. He was allegedly spotted as far north as San Francisco and Oakland. One reported sighting was at a Glendale gas station in the back seat of a car, wrapped in newspaper with only his head showing. The station owner described the driver as a “foreign-looking man, probably an Italian,” accompanied by a woman.

The boy’s father, Walter J.S. Collins, who was serving time in prison for robbery, believed that former inmates out for revenge against him may have kidnapped his son, though there were no witnesses and no proof that that had occurred.

Really it was strange and unexplained one, waiting for the next part dear

Thanks for stopping by here!