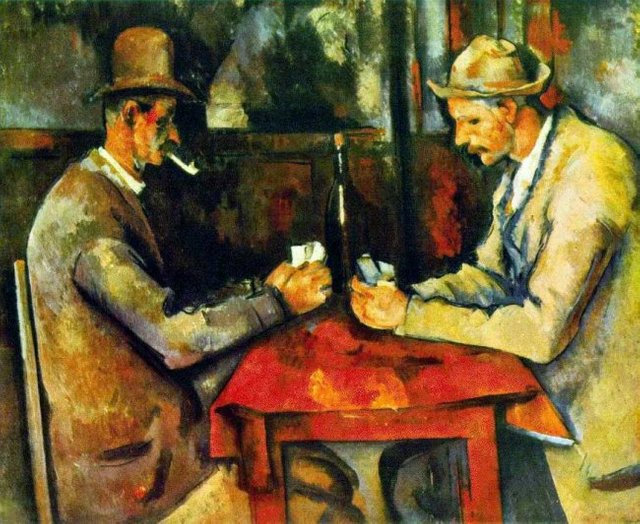 This painting is seen as one of the most famous paintings in the history of modern art.
The painting is one of five paintings by the artist Paul Cezanne and includes the same idea: people playing paper.
Cezanne drew the painting from the atmosphere of his Parisian region,   "Eixan Provence," which included a mixture of people, workers,  artisans,  peasants and ordinary people.
In the painting Cezanne tried to rediscover the function of space and  lines. The construction of the painting depends mainly on the center of  the  bottle located in the middle of the table, which divides the space  into  opposite areas to emphasize the dual nature of the subject.
Cezanne was a close friend of Emil Zola, who later became one of the most famous French novelists.
Cézanne was influenced by Eugène Delacroix and Edouard Manet, but he   was more influenced by the Camille Pesaro style, which he supported a   lot and introduced to the Impressionists in light representation and   capture of the effects of shifting nature, through light scattering and   the economy of lines.
In "Paper Players" the atmosphere seems rather serious and gloomy, and   this impression is reinforced by the darker brown and darker colors of   the table, blending the blue and black colors.
The idea of ​​playing cards emerged in the final stages of Cezanne's  artistic life. It is said that the artist may have wanted behind the  idea to portray  the confrontations that were taking place between him  and his father,  who was always detracting from him and questioning his  talent.
Cezanne was often interested in drawing the most consistent and durable  objects such as landscape, buildings and still nature. The "paper  players" are a departure from the artistic style he has devised for  himself. This may be due to the artist's close association with the  atmosphere and details of his local environment.
For years, Cezanne has been known only to a small circle of his old   colleagues and some of the new and enthusiastic impressionists, such as   Van Gogh and Paul Gauguin.
But at the time of his death in 1904, Cezanne had achieved a legendary   status among the artists of his time, and exhibited his works in the   largest art exhibitions, and was pouring in his studio many young   artists to observe and learn from it.
Seven  years ago, his painting, "Curtain, Porcelain and a Fruit Dish",  was  sold at the Sotheby's auction for more than $ 60 million, making it  the  sixth most expensive painting in the world.

img by :   The Paper Players of the French Artist Paul Cezanne, 1892

art drawing life photography blog
11 days ago by amar-tohamy (41)
$175.84
12 votes
Reply 0
Authors get paid when people like you upvote their post.If you enjoyed what you read here, create your account today and start earning FREE BEARS!